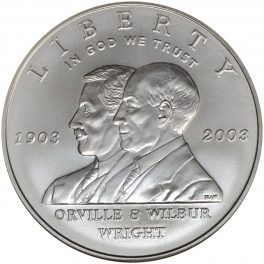 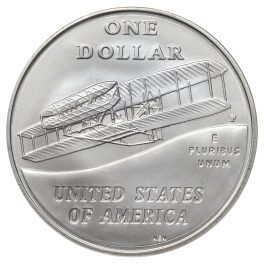 The 2003 $1 Silver First Flight Commemorative Coin shows the same event that was shown on a previous gold commemorative coin. This depicts the first flight by the Wright Brothers. On the obverse, the coin shows the two brothers portraits while the reverse shows their plane. This coin was minted at the Philadelphia Mint.
Obverse: Liberty – In God We Trust – 1903 – 2003 – Orville & Wilbur Wright | Reverse: One Dollar – E Pluribus Unum – United States of America