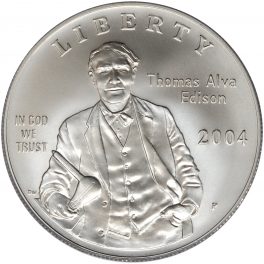 The 2004 $1 Silver Edison Commemorative Coin is a well struck coin that often appears with a darker luster. The obverse image shows Thomas Edison sitting, while the reverse image shows the light bulb. This coin is commemorating the 125th anniversary of the invention of the light bulb. This coin was minted at the Philadelphia Mint.
Obverse: Liberty – Thomas Alva Edison – 2004 – In God We Trust | Reverse: 125th Anniversary of the Light Bulb – 1879 – 2004 – United States of America – One Dollar – E Pluribus Unum