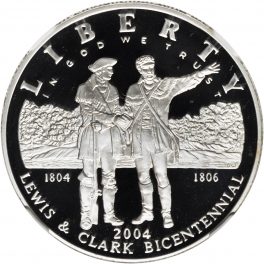 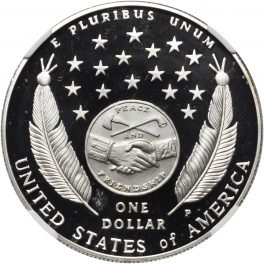 Information and History of $1 2004 Lewis and Clark Silver Coin

The 2004 $1 Silver Lewis and Clark Commemorative Coin commemorates the 200th anniversary of the Lewis and Clark Expedition. You may recognize the reverse design since it was used on the reverse of the 2004 Jefferson Nickel. The front shows the two explorers with arms outstretched as if they are looking for directions. The issue price on this coin at release was $35. This coin was minted at the Philadelphia Mint.
Obverse: Liberty – In God We Trust – 1804 – 1806 – 2004 – Lewis & Clark Bicentennial | Reverse: E Pluribus Unum – United States of America – One Dollar – Peace and Friendship