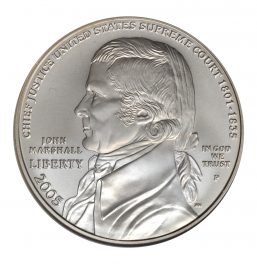 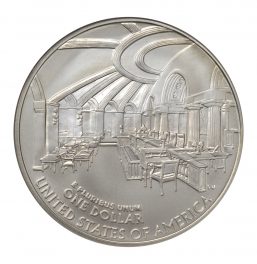 The 2005 $1 Silver Marshall Commemorative Coin marks the 250th anniversary of John Marshall’s birth. Marshall was the fourth Chief Justice of the Supreme Court and he helped law down the basis for constitutional law. The obverse shows his portrait while the reverse shows a room of the Supreme Court. This coin was minted at the Philadelphia Mint.
Obverse: Chief Justice United States Supreme Court 1801-1835 – In God We Trust – John Marshall – Liberty – 2005 | Reverse: United States of America – One Dollar – E Pluribus Unum