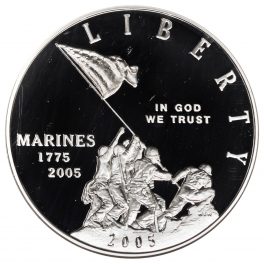 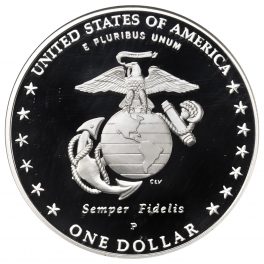 The 2005 $1 Silver Marine Corps Commemorative Coin depicts a scene on the obverse of the famous flag at Iwo Jima in World War II. The coin was struck in remembrance of the 230th anniversary of the forming of the Marine Corps in the United States. This coin is meant to honor the men and women that died. Its original price for the public was $35. This coin was minted at the Philsdelphia Mint.
Obverse: Liberty – Marines 1775 2005 – 2005 – In God We Trust | Reverse: United States of America – E Pluribus Unum – One Dollar – Semper Fidelis