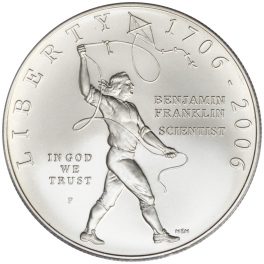 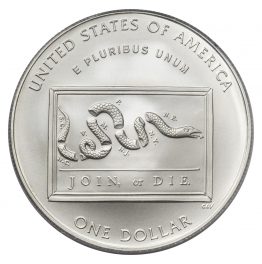 The 2006 $1 Silver Benjamin Franklin-Scientist Commemorative Coin was designed by Norman Nemeth and Charles Vickers. The front shows Franklin flying his famous kite and the reverse shows a snake cut into several pieces. The Mint produced two coins for this 300th Anniversary of Benjamin Franklin’s birth and the coins were originally released at a price of $35 each. This coin was minted at the Philadlephia Mint.
Obverse: Liberty – 1706-2006 – Benjamin Franklin Scientist – In God We Trust | Reverse: United States of America – One Dollar – E Pluribus Unum – Join, or Die