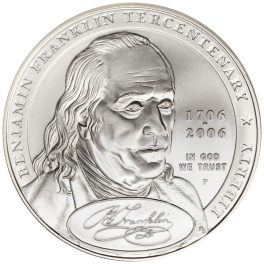 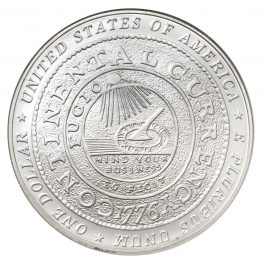 The 2006 $1 Silver Benjamin Franklin-Founding Father Commemorative Coin is a bit more intricate design than the previous Franklin commemorative. This coin has a reverse design that was done in the style of the Fugio cents in the late 1700s. The obverse shows an older Franklin’s portrait. This coin was minted at the Phildelphia Mint.
Obverse: Benjamin Franklin Tercentenary – Liberty – 1706 2006 – In God We Trust | Reverse: United States of America – E Pluribus Unum – One Dollar – Continental Currency – 1776 – Fugio – Mind Your Business