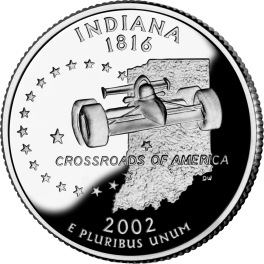 The obverse of the 2002 Indiana State Quarter shows the standard Washington Quarter design with a few alterations. The Washington Quarter, that ran from 1932-1998, had the date on the obverse, as well as the word “Liberty.” This design was changed slightly with the introduction of the State Quarters, and later the Territory Quarters and National Park Quarters. The new design still shows Washington looking left, however the obverse text now reads “United States of America – Liberty – In God We Trust – Quarter Dollar.” The reverse of this coin depicts one of the most famous races in the United States, the Indianapolis 500 NASCAR automobile race. Over an outline of the state is a racecar coming towards you. Behind the racecar is a circle of 19 stars that represent Indiana’s place as the 19th state. The Indianapolis 500 was held every year since 1911, except throughout the World Wars. According to Mint policy, no commercial items can be featured on coinage. This coin breaks the rules by showing a car that represents a commercial event. The Governor of Indiana’s wife, Judy, began the process of developing ideas with the help of 3,737 entries. Those entries were dwindled down to 17 final choices. After a committee selected the final four, they were sent off to the Mint for final approval. The entry that the people of Indiana chose, as well as the Governor, was an image of a basketball player and a racecar. The design was submitted by Josh Harvey, a 17-year-old at the time. The other designs were a Cardinal, Crossroads of America logo, a torch and state flag, and Chief Little Turtle. The Mint sent back a revised design featuring Josh’s idea, minus the basketball player. The car had also been altered to a different position than before. The Commission of Fine Arts did not entirely agree with the new look of the quarter and asked the Mint to pursue the direction of Chief Little Turtle instead. That request was ignored and the coin went into production. Right before production began, the governor called an emergency meeting to change the design. Instead of the racecar, he lobbied for the representation of Chief Little Turtle again. However, the Governor came under scrutiny when it was pointed out that the representation of Chief Little Turtle did not liken his actual image. The Governor was embarrassed by this because he considered himself an expert on Native American Tribes and leaders. This was the 19th coin released in the Statehood Quarters program. The reverse text of the coin reads “Indiana 1816 – Crossroads of America – 2002 – E Pluribus Unum.” All of the Statehood Quarters were clad, meaning that they were seventy-five to eighty percent copper, and the rest was composed of nickel. The core of the coins were solid copper. These coins, however, were produced in silver for special Silver Proof Sets. The coins minted in included Tennessee, Ohio, Louisiana, Indiana, and Mississippi
Errors on the 2002 Indiana State Quarter There are currently no known errors of this coin. If you ever run across anything that looks unusual with the Indiana State Quarter, please contact one of our experts to have the error verified, or send the coin to a professional grading company for their opinion. However, the average circulation State Quarter is only worth the face value of $0.25. These coins can be spent, saved, or taken to the bank.
Varieties on the 2002 Indiana State Quarter This coin, designed by John Flanagan and Donna Weaver was produced in a silver variety as part of proof sets. There were a total of 888,826 silver coins produced for this series. They are composed of 90% silver and 10% copper. The average price of the single silver coin ranges from $5 to $10, depending on the grade. The easy indicator to determine if your coin is silver is by the mint mark. The silver quarters will have an “S” mintmark, rather than a “P” or “D.” In addition to the silver quarters, late-night TV. began selling gold plated State Quarters in an attempt to con viewers into thinking that the coin would be worth a lot more. Unfortunately, the amount of gold that it takes to plate a quarter is very insignificant, and these gold plated quarters have no value in the collector community.