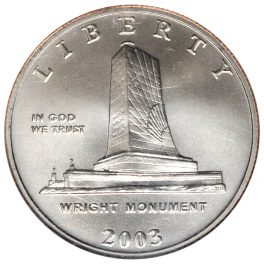 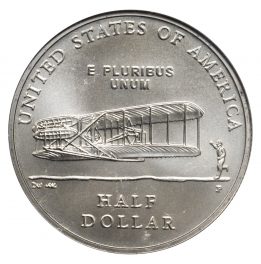 The 2003 $0.50 Clad First Flight Commemorative Coin shows the Wright monument on the obverse where the first flight by the Wright Brothers took place. The reverse shows the plane that was flown by the Wright brothers during that first flight. The original issue price of this coin was $10. This coin was minted at the Philadelphia Mint.
Obverse: Liberty – In God We Trust – Wright Monument – 2003 | Reverse: United States of America – Half Dollar – E Pluribus Unum