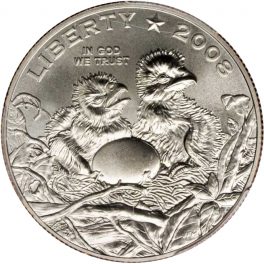 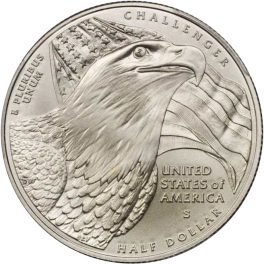 The 2008 $0.50 Clad Bald Eagle Commemorative Coin commemorates the American symbol, the bald eagle. Bald eagles have recently grown closer to extinction due to hunting and encroaching on their land. The obverse shows two baby eagles in a nest beside an egg. The reverse shows a heroic bald eagle posed infront of an American flag. This coin was minted at the San Francisco Mint.
Obverse: Liberty – 2008 – In God We Trust | Reverse: E Pluribus Unum – Challenger – United States of America – Half Dollar