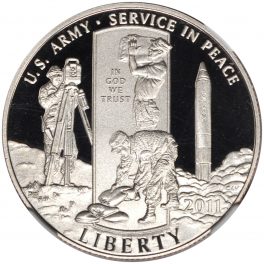 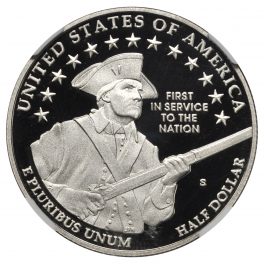 The 2011 $0.50 Clad United States Army Commemorative Coin shows a soldier dressed as a Minuteman on the obverse and holding a gun. The reverse of the coin shows modern day soldiers carrying supplies and working in the field. These coins were first prices at $16 dollars a peice. This coin was minted at the Denver Mint.
Obverse: United States of America – First in Service to the Nation – E Pluribus Unum – Half Dollar | Reverse: U.S. Army – Service in Peace – Liberty – In God We Trust