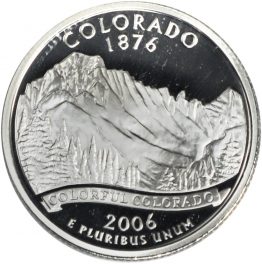 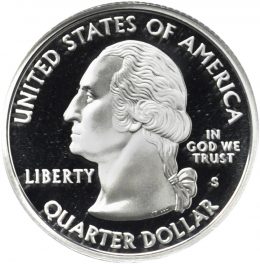 The obverse of the 2006 Colorado State Quarter shows the standard Washington Quarter design with a few alterations. The Washington Quarter, that ran from 1932-1998, had the date on the obverse, as well as the word “Liberty.” This design was changed slightly with the introduction of the State Quarters, and later the Territory Quarters and National Park Quarters. The new design still shows Washington looking left, however the obverse text now reads “United States of America – Liberty – In God We Trust – Quarter Dollar.” The reverse of this coin depicts mountains in the foreground that are surrounded by trees. Below the mountains is a banner filled with text. The mountains shown on this coin are the Rocky Mountains. The trees show the wonder foliage of the state, which is also represented in the motto shown at the bottom of the coin, “Colorful Colorado.” The Nebraska Secretary of State, John Gale, became the chairman of the Nebraska State Quarter Design Committee and posted a notice calling for idea entries to help decide what the design would show. Shortly after creating the committee, a Mint official visited the state to brief the residence and committee members on how the design process would work. After a number of entries, 25 concepts were posted online for residents to vote on. The ten most popular moved on to the next round. The committee made the next decision by sending four final ideas to the United States Mint to receive feedback. On June 1, 2005, Governor Dave Heineman announced that the Chimney Rock design won the competition and would be the next design on the coin. The Governor mentioned that the coin best represented the state and they achievements that the state had made. This was the 38th coin released in the Statehood Quarters program. The reverse text of the coin reads “Colorado 1876 – Colorful Colorado – 2006 – E Pluribus Unum.” All of the Statehood Quarters were clad, meaning that they were seventy-five to eighty percent copper, and the rest was composed of nickel. The core of the coins were solid copper. These coins, however, were produced in silver for special Silver Proof Sets. The coins minted in included Nevada, Nebraska, Colorado, North Dakota, and South Dakota
Errors on the 2006 Colorado State Quarter The Colorado State Quarters have what is known as a cud error. What happens in a cud error is there is a dent in the die that causes a bump to occur on the coin. This can be found in a number of spots on the coin, but it is normally found on the right, center of the coin. These coins tend to be common in circulation, so they are worth between $2 and $25. However, the average circulation State Quarter is only worth the face value of $0.25. These coins can be spent, saved, or taken to the bank.
Varieties on the 2006 Colorado State Quarter This coin, designed by John Flanagan and Norman Nemeth was produced in a silver variety as part of proof sets. There were a total of 1,585,008 silver coins produced for this series. They are composed of 90% silver and 10% copper. The average price of the single silver coin ranges from $5 to $10, depending on the grade. The easy indicator to determine if your coin is silver is by the mint mark. The silver quarters will have an “S” mintmark, rather than a “P” or “D.” In addition to the silver quarters, late-night TV. began selling gold plated State Quarters in an attempt to con viewers into thinking that the coin would be worth a lot more. Unfortunately, the amount of gold that it takes to plate a quarter is very insignificant, and these gold plated quarters have no value in the collector community.