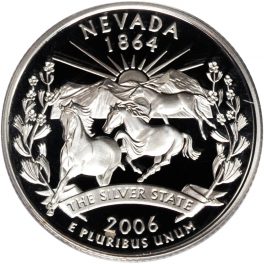 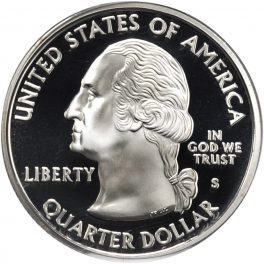 The obverse of the 2006 Nevada State Quarter shows the standard Washington Quarter design with a few alterations. The Washington Quarter, that ran from 1932-1998, had the date on the obverse, as well as the word “Liberty.” This design was changed slightly with the introduction of the State Quarters, and later the Territory Quarters and National Park Quarters. The new design still shows Washington looking left, however the obverse text now reads “United States of America – Liberty – In God We Trust – Quarter Dollar.” The reverse of this coin depicts a very detailed a beautiful design of stampeding stallions. There are three horses total shown on the coin. Two of the horses are running towards the viewer, while another stands in the background looking towards the sky. Mountains grace the background as the sun appears from behind them. To either side of the coin, there is a wreath of flowers that extends for 50% of the height of the coin. Below the horses is a small banner with the state motto, “The Silver State.” The mustangs shown on the coin represent the state’s large population of wild horses. The mountains in the background as topped with snow, however it is difficult to see. The motto refers to the state’s plentiful silver ore mines. Designs for this coin varied greatly. Daniel Carr, who had designed numerous other coins that were never accepted, designed a motif showing a train, poker cards, and a coin from the Carson City Mint. However, the Mint decided to take the coin in a different direction instead of showing those items. In 2004, Nevada State Treasurer Brian Kolicki was given the task of coming up with the design to grace the coin. He created a panel that consisted of a numismatist and several other people. Nevada had a long history is several different facets, so it was hard for the Committee to choose just one item to show. None of the art or concepts that the committee developed was acceptable to the Mint. Eventually, residents decided that they wanted a design called “Morning in Nevada” that would show wild mustangs running in the sunrise. As usual, when the final decisions on the coin came, the committee didn’t listen to any of the concerns or ideas that the citizens had. The committee tried every design they could, including one that featured a ram in the Sierra Nevada Mountains. But, the final coin was ramless and actually did have the citizen’s choice of the wild mustangs represented. This goes to show that sometimes what the people want is the best option. This was the 36th coin released in the Statehood Quarters program. The reverse text of the coin reads “Nevada 1864 – The Silver State – 2006 – E Pluribus Unum.” All of the Statehood Quarters were clad, meaning that they were seventy-five to eighty percent copper, and the rest was composed of nickel. The core of the coins were solid copper. These coins, however, were produced in silver for special Silver Proof Sets. The coins minted in included Nevada, Nebraska, Colorado, North Dakota, and South Dakota
Errors on the 2006 Nevada State Quarter There are currently no known errors of this coin. If you ever run across anything that looks unusual with the Nevada State Quarter, please contact one of our experts to have the error verified, or send the coin to a professional grading company for their opinion. However, the average circulation State Quarter is only worth the face value of $0.25. These coins can be spent, saved, or taken to the bank.
Varieties on the 2006 Nevada State Quarter This coin, designed by John Flanagan and Don Everhart was produced in a silver variety as part of proof sets. There were a total of 1,585,008 silver coins produced for this series. They are composed of 90% silver and 10% copper. The average price of the single silver coin ranges from $5 to $10, depending on the grade. The easy indicator to determine if your coin is silver is by the mint mark. The silver quarters will have an “S” mintmark, rather than a “P” or “D.” In addition to the silver quarters, late-night TV. began selling gold plated State Quarters in an attempt to con viewers into thinking that the coin would be worth a lot more. Unfortunately, the amount of gold that it takes to plate a quarter is very insignificant, and these gold plated quarters have no value in the collector community.