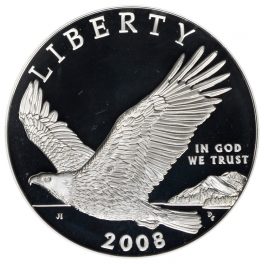 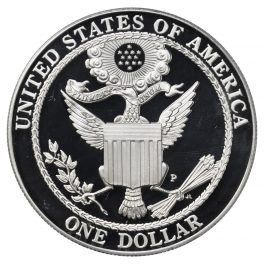 The 2008 $1 Silver Bald Eagle Commemorative Coin shows an obverse image of a flying eagle while the reverse image shows an eagle with a crest in front of it. This coin calls attention to our national bird, which is heavily hunted and there are now many less in existence. This coin was minted at the Philadelphia Mint.
Obverse: Liberty – In God We Trust – 2008 | Reverse: United States of America – One Dollar – E Pluribus Unum