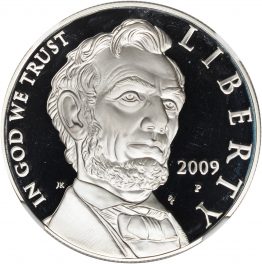 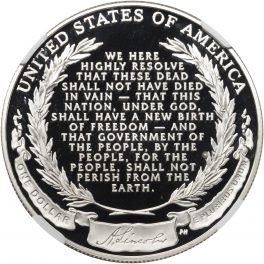 The 2009 $1 Silver Abraham Lincoln Commemorative Coin has an image of President Abraham Lincoln on the obverse, looking right. The reverse has an excerpt from the Gettysburg Address. This coin is to commemorate the 200th anniversary of Lincoln’s birth. The coin sold out in six weeks due to popular demand. You may have also seen Lincoln’s birth series on the 2009 cents. This coin was minted at the Philadelphia Mint.
Obverse: In God We Trust – Liberty – 2009 | Reverse: United States of America – E Pluribus Unum – One Dollar – We Here Highly Resolve That These Dead Shall Not Have Died in Vain that this Nation, Under God, Shall Have a New Birth of Freedom And That Government of the People, By The People, For the People, Shall Not Perish From The Earth