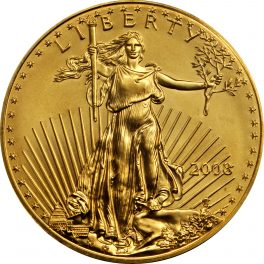 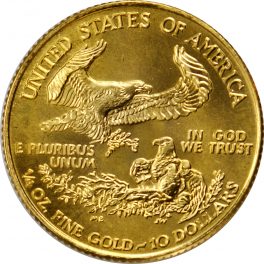 The 2008 $10 gold coin is essentially just a bullion coin. All that means is that the value of the coin will fluctuate depending on the current price of gold. This coin weighs a quarter of an ounce. So you can divide the current price of gold by four to get the melt value of this coin. Collectors refer to these as AGE or American Gold Eagles. The United States Mint releases these coins every year. The only difference is the year on the coin; otherwise everything else is exactly the same. Whether we are talking about a coin released in 2008, 1990, or any other year – you will always see the same features.

The 2008 quarter ounce coin has text that says: 2008 – Liberty – United States of America – E Pluribus Unum – In God We Trust – 1/4 OZ. Fine Gold ~ 10 Dollars – MB JW. The front or obverse of the coin pictures a female (Lady Liberty) holding a branch and torch. The back or reverse of the coin has an eagle.

2008-W $10 Gold American Eagle Proof: At the top of the page you can see where there were 18,877 $10 proof gold coins minted by the U.S. Mint in 2008. If you see a small W under the year, then you have a proof coin. The two types of coins are virtually identical otherwise.

Right now we are paying at least the full melt value for 2008 $10 AGE coins. Contact us to get an exact offer on your coin or entire collection.