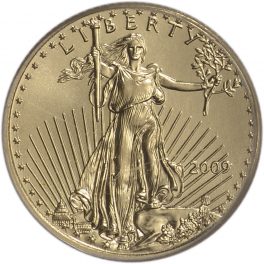 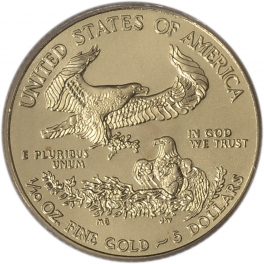 Information and History of 2009 $5 Gold Coins

The 2009 $5 gold coin is essentially just a precious metals product. All that means is that the value of the coin will be different based on the current price of gold. This coin weighs a tenth of an ounce. So you can divide the current price of gold by ten to get the precious metal value of this coin. Collectors refer to these as AGE or American Gold Eagles. The United States Mint releases these coins every year. The only change is just the year; no other design changes occur. It doesn’t matter if the coin was issued in 2009, 1995, or any other year – you will always see the same features.

The 2009 tenth ounce coin has text that says: 2009 – Liberty – United States of America – E Pluribus Unum – In God We Trust – 1/10 OZ. Fine Gold ~ 5 Dollars – MB JW. The back or reverse of the coin pictures a family of eagles. The front or obverse of the coin has Lady Liberty holding a branch and torch.

Proof $5 American Gold Eagle coins have been issued since 1988. However, in 2009 there was a vast global demand for gold. The mint decided to not release proof coins in 2009 because of the investor demand for the strictly bullion valued regular issue 2009 AGEs. So all coins from 2009 will not have a mint mark because no proof coins were minted.

Right now we are paying at least the full melt value for 2009 $5 AGE coins. Contact us to get an exact offer on your coin or entire collection.