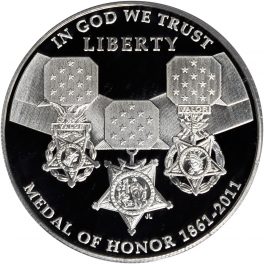 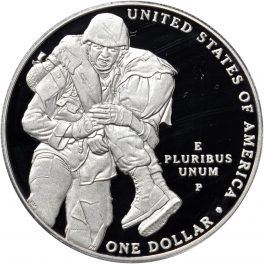 Information and History of $1 2011 Medal of Honor Silver Coin

The 2011 $1 Silver Medal of Honor Commemorative Coin was created by the United States Mint in gratitude for the soldiers who have severs and been awarded the medal. The first Medal of Honor was presented 150 years ago in 1861. The coin shows on the obverse a solider carrying his comrade who fell during battle. The reverse shows three different medals all aligned. This coin was minted at the San Francisco Mint.
Obverse: United States of America – One Dollar – E Pluribus Unum | Reverse: In God We Trust – Liberty – Medal of Honor 1861-2011