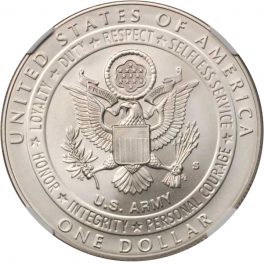 The 2011 $1 Silver United States Army Commemorative Coin shows a man and woman soldier on the obverse to represent all the men and women who have been deployed to help fight for our country’s freedom since 1775. The reverse has the Great Seal of the United States. This coin was minted at the San Francisco Mint.
Obverse: Liberty – 2011 – In God We Trust | Reverse: United States of America – One Dollar – Loyalty – Duty – Respect – Selflessness – Honor – Integrity – Personal Courage – U.S. Army