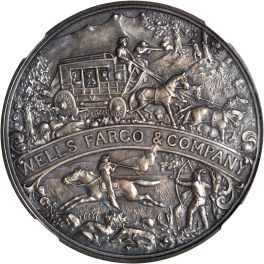 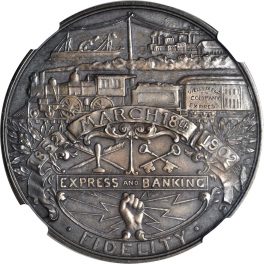 Diameter: 39.00 mm
Mintage/Proof: NA / 0
Weight: NA
Metal: Silver
I Own 1902 So Called Dollars Commemorative and Exposition
Add To My Collection
View My Collection

This So-Called Dollar is given the catalog number HK-296

The obverse text on this So-Called Dollar reads Wells Fargo & Company and the reverse text is 1852 March 18th 1902 Express and Banking Fidelity. The front side of the coin shows a horse drawn carriage in the upper portion of the coin, with three horses and two men, one of which is firing a rifle, the bottom half has a man on a horse firing a gun at a Native American who is shooting a bow and arrow. The backside of the coin depicts a train in the upper portion with electrical poles above it and a ribbon below, a hand holding lightening bolts at the bottom and various branches throughout.