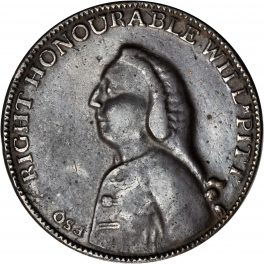 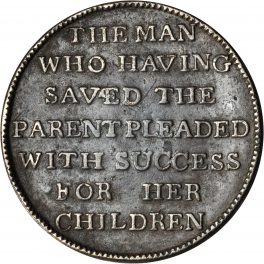 William Pitt was revered by the American Colonists and his fellow Englishman for his arguments for the common man, which gave rise to his nickname, “Great Commoner”. This medal displays a bust of Pitt on the obverse. Pitt faces to the left, while wearing a braided wig and a coat. The legend states, “Right Honourable William Pitt Esq.” The reverse lacks an image and simply states, “The man who having saved the parents pleased with success for her children.”

The obverse and reverse text read as follows: Right Honovrable Willm Pitt Esq. | and | The Man| Who Having Saved the | Parent. Pleaded | with Success | For Her | Children.