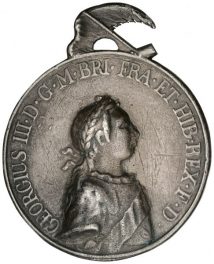 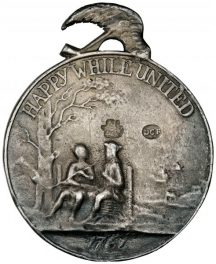 This rare Indian medal emphasizes the unity of Britain, the Colonies, and the Indian tribes and the peace that comes with unity. Obverse features King George III, facing to the right wearing a suit of armor, laurel crown, and ribbon of the Garter. Around his head the legend translates, “George III, King of Great Britain, France, and Ireland, Defender of the Faith.” Reverse displays an Indian smoking a pipe while sitting near a harbor, assumed to be New York harbor because of the counter stamp which states, “N. York” and “DCF”. The legend states, “Happy while united” and in exergue the year, 1764. The medal uniquely has a loop for suspension, which is formed by a pipe and eagle’s wing. Only four known copies of this medal exist.