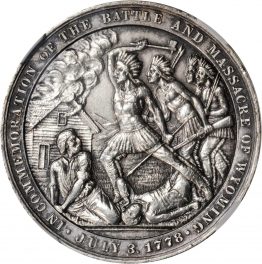 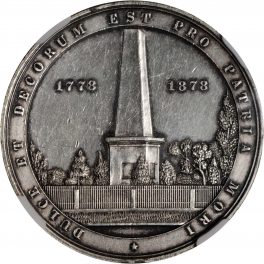 Diameter: 36.00 mm
Mintage/Proof: NA / 0
Weight: NA
Metal: Silver
I Own 1878 So Called Dollars Commemorative and Exposition
Add To My Collection
View My Collection

This So-Called Dollar is given the catalog number HK-120a

The obverse text on this So-Called Dollar reads In commemoration of the battle and massacre of Wyoming July 3, 1778 and the reverse text is Dulce Et Decorum Est Pro Patria Mori 1778 1878. The front side of the coin shows four Native American Indians attacking two men in front of a burning house. The Indians have spears, axes and rifles. One man has already died and the other is close to dying. The backside of the coin depicts a monument in the dead center with fur and deciduous trees behind the fence. Around the monument is Latin text describing the events that are occurring.

Brass Medal for the Wyoming Battle and Massacre