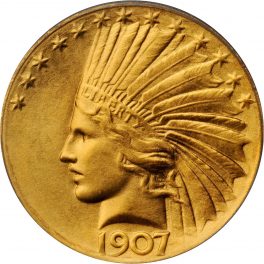 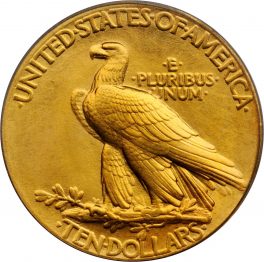 The typical example of the 1907 Periods, Wire Rim Indian Gold Eagle is sharply defined in the centers. Since this design includes concave fields that curve up from the centers and culminate in a sharp wire rim, the detail at the borders is usually a bit soft. Luster quality is very good, if not excellent, and features a satin texture with numerous, random die polish lines in the fields. Most survivors display at least a few minor abrasions, although there are exceptions at both ends of the spectrum that are either heavily marked or virtually pristine.
An extremely popular issue with advanced collectors, the 1907 Periods, Wire Rim from the Philadelphia Mint is the only Indian eagle that represents Augustus Saint-Gaudens original concept for this coin design. Although sometimes referred to as a pattern, it has long been collected as an integral part of the Indian eagle series. The mintage is 542 pieces, although only 472 pieces were actually distributed, with the remaining 70 examples melted in the Mint between 1915 and 1918. These coins were never released into circulation but, rather, were distributed to members of President Theodore Roosevelt’s cabinet, Congressmen and Treasury Department officials, as well as private citizens and museums that placed orders for examples. As such, most are found in Mint State, and there are even some extraordinary Superb Gems that are essentially as struck with nearly flawless surfaces. The typical example is Choice Uncirculated and grades MS-63 or MS-64. Gems in MS-65 are scarce relative to the demand for them while in higher grades the 1907 Periods, Wire Rim is rare. Amazingly NGC has assigned the grade of MS-69 to a single coin, making it the finest certified example of this issue.