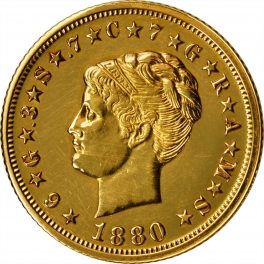 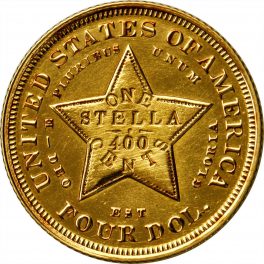 The 1879 and 1880 $4 gold Stella coins were born in an era in which Mint officials had a lively business in the making of restrikes, limited-edition patterns, and other numismatic delicacies.  Thus, while the initial 1879 four-dollar coins of the Flowing Hair design were made for their intended purpose, which was to illustrate the concept of a new denomination, demand among government officials and contemporary numismatists for the proposed coin was so great that the Mint eventually produced as many as 700 additional specimens in early 1880, still using the 1879-dated Flowing Hair dies.  These pieces are struck in standard alloy of 90.00% gold, 10.00% copper on shaved half eagle planchets.  Other varieties of four-dollar gold Stellas were struck to create rarities.  The Coiled Hair type by George T. Morgan, in fact, was never made available openly to numismatists, congressmen, or anyone else.  Instead, privileged officials filtered them out of the Mint over a period of time.  These were first illustrated in a numismatic publication years later in the early 20th century.  The same is true of the rare copper, aluminum and white metal impressions that were created in secrecy.  Despite its popularity with congressional leaders and other contemporary Americans with knowledge of the coin, in the end the four-dollar gold Stella failed to gain authorization for regular issue production and the project ended.

Suffice to say, this is not the type of coin you are going to find in your uncle’s sock drawer.  It is rare today that new examples are introduced to the market.  Most $4 gold coins that exist are held in important numismatic collections.  These are very valuable coins that costs tens of thousands of dollars.  If you are lucky enough to own one and are considering selling, then please contact us.  Info@Coinappraiser.com