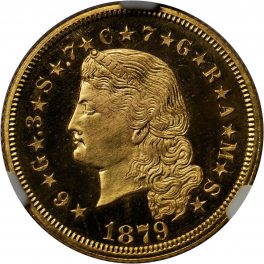 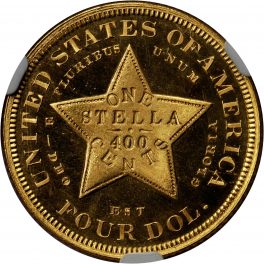 The typical example is sharply struck in all areas save for the high point definition on Liberty’s hair which is somewhat obscured due to striations imparted when the Mint shaved the half eagle planchets used for most examples. Specimens range in finish from uniformly reflective to deeply cameo with strong contrast between satiny devices and mirrored fields. Several 1879 Flowing Hair Stellas are impaired due to having been used in jewelry or as pocket pieces, which is perhaps not surprising since many of the coins were initially presented to congressmen and other non-numismatists. Among the other survivors most exhibit at least a few light hairlines or other surface blemishes, with virtually pristine specimens few and far between.

Although traditional numismatic wisdom states that approximately 425 examples were struck, the mintage for the 1879 Flowing Hair Stellas is likely closer to 725 pieces. This includes the 25 or so initially struck in 1879 for review by Congress as well as approximately 700 restrikes made in 1880 for distribution to government officials and numismatists. Only 300 to 400 specimens are believed to have survived at all levels of preservation, a small total given the popularity of this type with numismatists and the strong demand among both pattern specialists and gold collectors. Most survivors grade Proof-60 to Proof-64 with little, if any, cameo contrast between the fields and devices. Gems are rare with any finish. Equally elusive are Cameo and Deep/Ultra Cameo specimens designated by PCGS and NGC. Particularly noteworthy examples have been certified Proof-68 Ultra Cameo by NGC and Proof-67 Deep Cameo by PCGS.