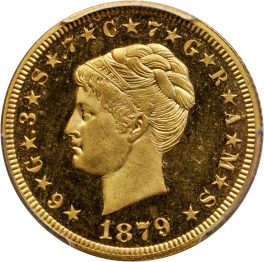 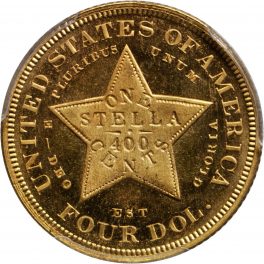 Struck on shaved half eagle planchets like its identically dated Flowing Hair counterpart, all known 1880 Coiled Hair Stellas are a bit lightly defined over the central high points of Liberty’s hair due to Mint-made striations. Otherwise the coins are sharply struck. The few known specimens are either uniformly mirrored in finish or possess modest field to device contrast. Most are overall smooth, if not virtually pristine.

Produced clandestinely by Mint officials and never made openly available to the contemporary public, the mintage of 1879 Coiled Hair Stellas is unknown, although presumably small given the extreme rarity of examples. Approximately a dozen specimens are known, most of which are Gems grading Proof-65 or finer, either with or without a Cameo designation. These coins were initially presented to recipients with close ties to Mint personnel, most of whom handled their special charges with great care. Among the finest known are coins certified Proof-67 or Proof-67 Cameo by PCGS and NGC.