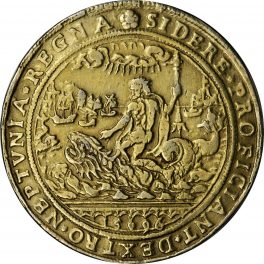 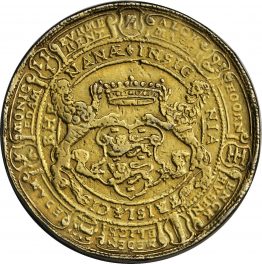 A well-designed rarity, this medal is a combination of legend, mythology, and religious overtones. The obverse center of the medal features Neptune on a sea creature, trident in his right hand. He is riding towards a port city on the horizon that is lit up by the Hebrew word “Jehovah” spelled out in the sky. The Latin inscription translates to “May the kingdoms of the sea prosper beneath a fortunate constellation”. The reverse displays the Arms of Cis-Rhenic Frisia, held up by two lions. Above the lions is a crown. On the scrolls that circle the outside are the names of seven Dutch port cities: Alckmaar, Hoorn, Enckhuysen, Medemblick, Edam, Monickendam, and Purmerend. This extremely detailed medal commemorates the expansive Dutch empire that extended at that time to St. Thomas, Brazil, and India.

1599 The Capture of Saint Thomas Medal