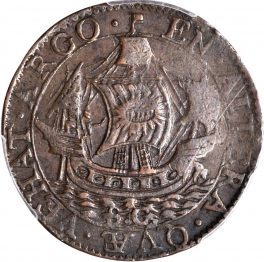 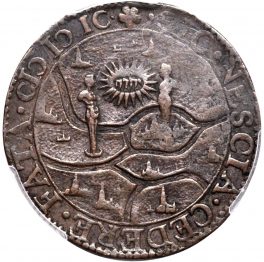 History, Information, and Value of 1599 Van Der Does Commemorative Medal

This medal commemorates the successful Dutch victory in the New World; a victory that stopped Spanish dominion. On the obverse, a large ship is center encircled by Latin, which translates to “See what heroes the second Argo carries”. Argo harkens back to the ship of Jason, which he sailed to capture the Golden Fleece in Greek mythology. The name “Jehovah” is written on the sail in Hebrew letters. The reverse Latin translates to “Thus the Fates who know not how to yield” or “Destiny cannot be changed”. The reverse landscape features two islands, center of which is two Termini or gods of boundaries which represent the islands of Bommel and Thiel which were the two islands captured by the Dutch. The whole medal denotes that Spanish power in the New World had divinely ended and that Holland Admiral, who led the Dutch to victory, was akin to Jason and his success with the Golden Fleece.

1599 The Capture of Saint Thomas Medal