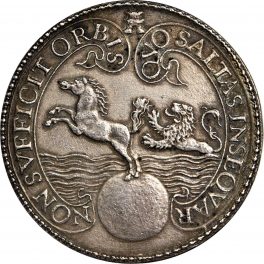 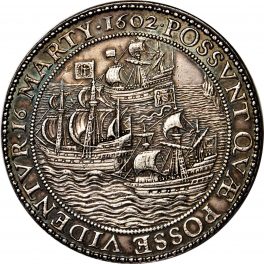 This medal details the capture of the Spanish galleon, the Santiago by two small Dutch ships. The obverse displays the actual scene of the three ships on the high seas, encircled by Latin that translates to “they are able to do what seems to be possible; March 16, 1602”. The reverse demonstrates the Spanish abandoning the New World. “One world does not suffice” is written in Latin and encircles the scene. Philip II is pictured as a horse, leaping from the globe, which is meant to illustrate his leaving of American possessions. Behind the horse, is the lion of Zealand, and the two are encircled by the Latin legend, “One world does not suffice, wherever you leap, I will follow”. At the very top center of the Latin phrasing is a castle, which is the mintmark of Tournay. This medal demonstrates the Dutch strength in the New World and the constant rivalry of Holland and Spain concerning possessions in the Indies.