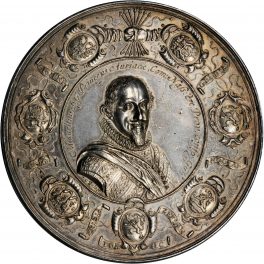 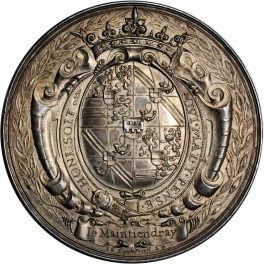 This commemorative medal details the power of the Dutch in the New World after two successful battles, one in Lima, Peru under Admiral L’Hermite, and the other off the coast of Brazil under Admiral Willems. The obverse of this medal features the armored bust of Maurice, Prince of Orange. His full title, “Prince of Orange, Count of Nassau and Governor of the United Providences” is written in an ornate script circling the bust. Around the outer edge of the coin are the arms of the seven Dutch providences. The reverse details the arms of Orange-Nassau with “I will maintain” inscribed on a tablet below the arms. The inscription of the Order of the Garter, of which Maurice was a member, also appears on the coat of arms. A laurel wreath with two branches, for the two victories, encircles the arms. This detailed work demonstrates the Dutch superiority in the New World.