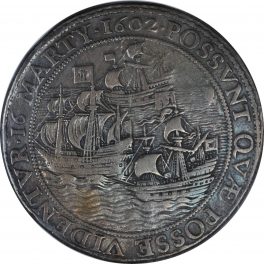 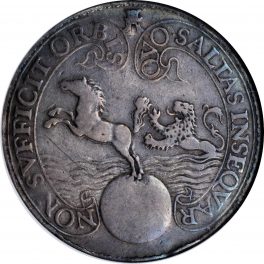 History, Information, and Value of 1628 Capture of Matanzas Treasure Medal

Pieter Heyn was the successful vice-admiral in the West India Company Navy who led 31 warships to Matanzas Bay to stop the Spanish from entering the Havana port. Not only did he stop the Spanish, but he also captured their warships and gained an estimated 5 million ducats of gold and silver. This medal commemorates his victory. Obverse, the text translates to “The nations shall serve him until the time come in which they shall serve themselves, Jeremiah 27:7”. The image in the center of the medal is a map of the Western Hemisphere, as known by the Dutch in the seventh century. Reverse, is an aerial image of the conflict at Matanzas with small Dutch ships against the Spanish. The Latin directly below the scene translates to “On September 8th, 1628, the West India Company, under the auspices of the United Providences of the Netherlands and under the command of Peter Heyn, the son of Peter, captured near Matanzas, a bay of the Island of Cuba, the royal silver [treasure] fleet of the Kingdom of New Spain”. Encircling the medal is Latin text from Jeremiah which translates to “the daughter of Babylon is as a threshing floor; she shall be threshed from the north, in the time of her harvest, Jeremiah 61:33 and 48”.