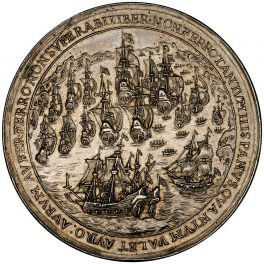 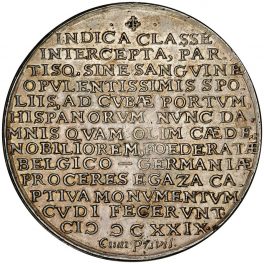 This commemorative medals details the Dutch power against the Spanish in Cuba. The Battle of Matanzas occurred without bloodshed on the part of the Dutch who successfully captured over 5 million ducats from the Spanish and successfully stopped Spanish intrusion into the Havana Port. The obverse of the medal features a Dutch fleet of 16 ships with a crosslet at the top of the medal indicating the bloodless victory for the Dutch. The taunting script reads “the Spanish is not so strong with the sword as with gold: take away the gold, the Iberian will no longer win with the sword.” The reverse reads “the fleet of the Indies being cut off, and very rich booty taken without bloodshed, at the Bay of Cuba, now more celebrated by the loss of the Spaniards than formerly by their defeat, and the chiefs of the United Provinces of the Netherlands have caused this medal to be struck from the captured silver. 1629. With privilege.” A cross at the top is the only decoration on the back of the medal.