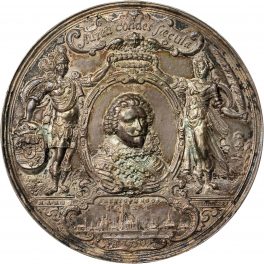 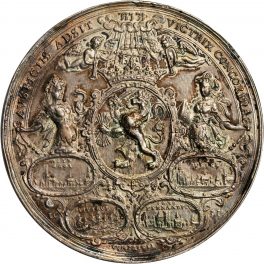 History, Information, and Value of 1631 Capture of Pernambuco Medal

Value of 1631 Capture of Pernambuco Medal

This medal commemorates Frederic Henry, Prince of Orange after his victorious capture of Portuguese and Spanish possessions, mainly the city of Pernambuco. The prince, wearing armor, faces three-quarters to the right in an ornate frame. On the left is Mars, holding a shield while on the right is Victoria, holding a palm branch. Both figures support the laurel crown centered above the prince’s head. Inscribed over the laurel wreath is the translated “he founds the golden age”, written on a tablet held up by a cherub. At the base of the medal is the year and a city. The reverse of the medal portrays the Belgian lion on a shield. Prudence, on the left, holds a snake while Constancy on the right leans on a column. Four cartouches below the two figures represent views of three cities and a sea fight next to the name and the year. On either side of the Hebrew word for Jehovah are two angels blowing their horns. They are surrounded by Latin, which translates to “let concord, bringer of victory, be at the ruler’s side”. This ornate medal is signed by the die cutter, A. Van Der Wilge.

1631 Bay of All Saints Victory Medal