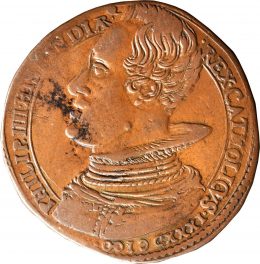 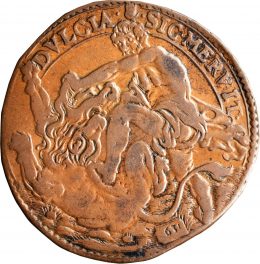 History, Information, and Value of 1631 Bay of All Saints Victory Medal

Value of 1631 Bay of All Saints Victory Medal

The Spanish victory over the Dutch at the Bay of All Saints is commemorated in this medal. Obverse, the piece pictures Philip IV, in his armor, facing to the left. Encircling his figure is the Latin translation of “Philip IV, Catholic King of Spain and the Indies. 1631”. Reverse is a rendering of the Biblical hero Sampson, who is determined to be Spain, overcoming a lion, the symbol of Holland. The fight takes place in a sugar field, which was the basis for the Spanish fight against the Dutch. Circling Sampson’s head is a banner stating, “Thus he deserved joys”. Van Loon designed the engraving, and some pieces may have a mintmark after the year on the reverse.