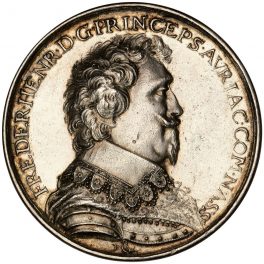 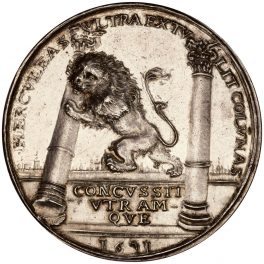 History, Information, and Value of 1631 Dutch Navy Victory in the New World Medal

Value of 1631 Dutch Navy Victory in the New World Medal

This Dutch medal displays the prowess of the Dutch navy in the New World. Obverse, Frederick Henry faces to the right with an impeccable moustache and goatee, dressed in armor with a lace collar. Around his figure is his full title, “Frederick Henry, by the grace of God, Prince of Orange, Count of Nassau”. The reverse displays the Dutch lion pulling down the columns of Hercules. The translation of the wording circling the scene explains the lion’s actions for “he has extended [his bounds] beyond the columns of Hercules; he has struck each of them”. Below the scene is the year, 1631.

1631 Bay of All Saints Victory Medal