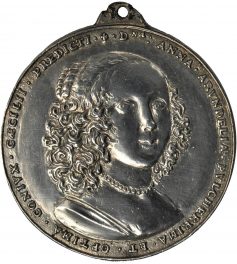 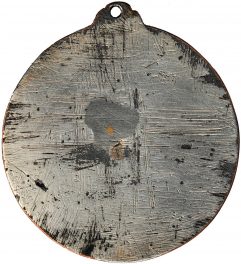 Lord Baltimore governed the colony of Maryland from his home in England for forty-two years, beginning in 1632 with the Charter from King Charles I. This rare medal recognizes his governorship. Centered on the obverse of the medal is a bust of Charles in armor, facing three-quarters right. Around his head is his title, in Latin, which translates to “Lord Cecil, Baron Baltimore, Lord Paramount of Maryland and Avalon & Co”. The reverse has an image of his wife, Anne Arundel. Her title is also written in Latin around her head and states “Lady Anne Arundel, the most beautiful and excellent wife of the said Cecil”. The image details her curly hair, the pearl necklace around her neck, and the hint of a smile as she too face to the three-quarter right.