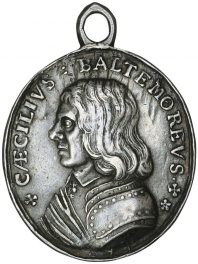 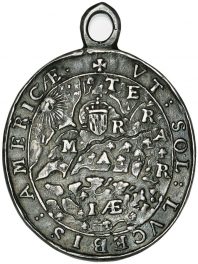 This rare medal features Cecil Calvert, Lord Baltimore in the center, facing to the left. He is wearing armor and around his head is his title in Latin followed by a cross and a rosette, which has been determined to be the mintmark for this medal. Reverse is a map of Maryland, identical to the one drawn up by John Smith in 1612. A shield with the coat of arms for the Calvert family is place above the Maryland capital city. The Latin inscription around the map reads, “As the sun thou shalt illumine America; Maryland”. This medal is also known as the Maryland Settled Medal but has no known use and it is unknown whether or not the medal was used as a Peace Medal. The age of the medal is unknown as well as it was not dated.