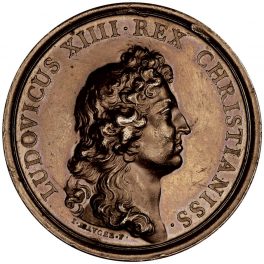 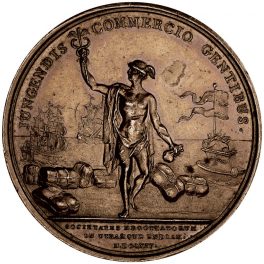 This medal celebrates Louis XIV, whom the medal describes as the “Most Christian King”. The bust of Louis, as designed by Jean Mauger, faces to the right. Reverse stands the god of commerce, Mercury. In his right hand is a caduceus, and in his left hand is a bag of money. Behind the figure are bales of merchandise, several ships near the horizon, and a burning altar and banner. Circling the scene is Latin, which translates to “Nations united by Commerce. The Societies of Merchants to both Indies, 1664”.