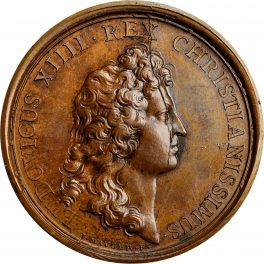 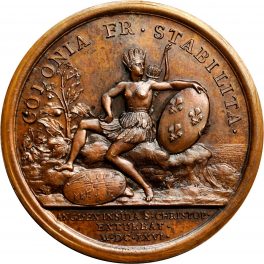 History, Information, and Value of 1666 Conquest of St. Christopher Medal

In 1666, the French defeated the English, and expelled them from the Island of St. Christopher. This medal commemorates their success. Obverse features a bust of Louis XIV, facing to the right. Around his head is Latin, which translates to “Louis XIV, Most Christian King”. The artist’s signature, “I. Mavger. F.” is located directly below his shoulder. Reverse, an Indian Queen sits on a rock. She holds the French shield, indicating the French success. At her feet lays the British shield; at her left is a tobacco plant. Surrounding the scene is translated, “The French Colony established. England driving from the Island of St. Christopher, 1666.”