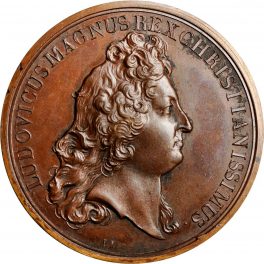 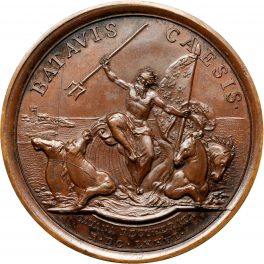 History, Information, and Value of 1676 Recovery of Cayenne Medal

Value of 1676 Recovery of Cayenne Medal

In 1676, the French bested the Dutch and captured the colony of Cayenne. This medal demonstrates their skill in battle and success against the Dutch. Obverse, features a bust of Louis XIV, facing to the right with his hair curling around his shoulders. Around his head is inscribed his title as the “Louis XIV, the Great Christian King”. Bottom of his shoulder lists the artist’s name, Jean Mauger, a French medalist. Reverse translation reads “The Dutch slain, Cayenne recovered, 1676”. The scene pictures Neptune rising from the ocean, while driving four horses, his trident in his left and the French banner in the right.