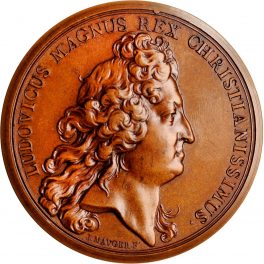 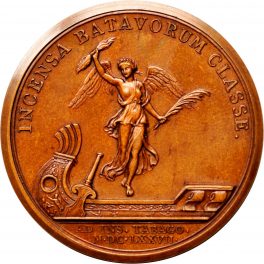 This medal commemorates the successful French victory over the Dutch at Tobago. Obverse, features a bust of the Louis XIV; around his head his title reads, “Louis XIV, The Great Christian King”. Under truncation reads the artist’s name, “J. Mavger. F.” Reverse, stands Victory alighting on the galley of a ship, her face leaning to the left. In her right hand appears to be a torch or a thunderbolt, while in her left she holds a palm branch. A paddle leans against the galley to her left. Around her is written, “The fleet of the Dutch burned” and in exergue, “At the Island of Tobago. 1677.”