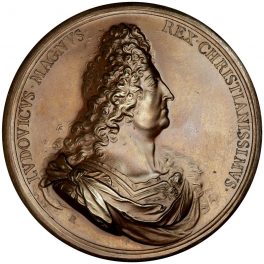 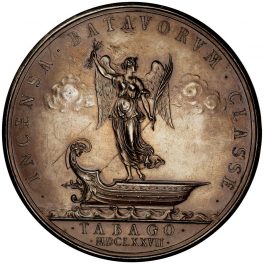 This large, rare medal commemorates the successful French victory over the Dutch at Tobago. Obverse, features a bust of the older Louis XIV, without armor; around his head his title reads, “Louis XIV, The Great Christian King”. Under truncation simply reads “R”. Reverse, stands a winged Victory on a small boat. Clouds dot the horizon behind her. In her right hand she holds a cluster of arrows, and in her left she holds a palm branch. Her skirt blows in the wind to the right, and her face turns in the same direction. Around her figure is written, “The fleet of the Dutch burned. Tobago, 1677.”