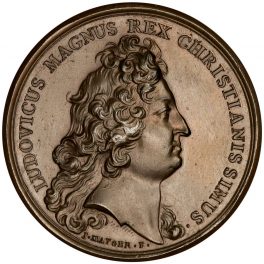 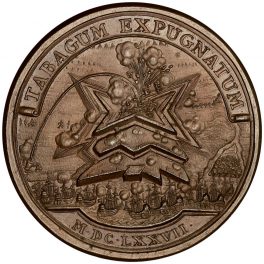 This medal commemorated the successful French victory over the Dutch at Tobago. Obverse, featured a bust of mature Louis XIV, facing to the right. Around his head is his title. Under the bust is written the artist’s signature. Reverse displays an image of the attack of Tobago. The magazine is enveloped in smoke from an explosion, and the trail of the bomb can be seen from the left. The lettering around the scene translates to “Tobago taken by assault, 1677”. The base of the coin shows eleven vessels surrounding the fort.