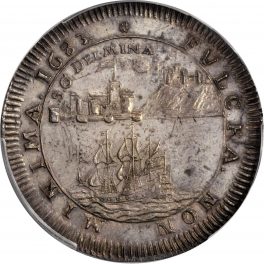 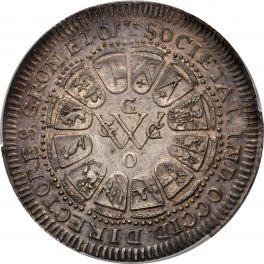 This medal originated from a quarrel instigated between two rival merchant companies; the winner of the quarrel created this medal. The front features the coat of arms that corresponds with the winning director’s family. The Latin around the coat translates to ” The Directors of the Company of the West Indies for Groningen and Ommelande”. The center lettering translates to “incorporated West India Company Chamber of Groningen and of Ommelande”. Within the beaded circle are twelve shields bearing the arms of the directors. Reverse, features the forts Santiago and St. George, both of which were situated on the Gold Coast of Africa, or Ghana. In the foreground, a ship is featured, sailing to the left. Eventually, the Gold Coast would become the center of the African slave trade, as Brazil’s need of slaves grew.