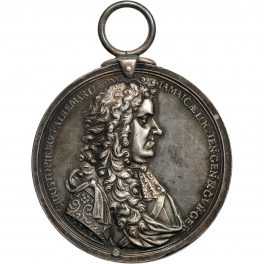 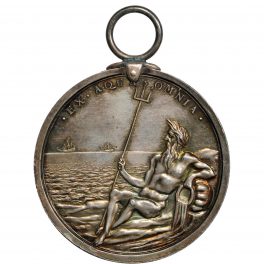 Front of this rare medal features the Duke of Albemarle, facing to the right. He is wearing decorated armor; his hair curls down below his shoulders, and on the truncation if written G.B.F. for George Bower, an engraver. Albemarle was the governor of Jamaica and his title is written along the edge of the medal, “Christopher, Duke of Albemarle, Lieutenant-General and Governor-General of Jamaica”. Reverse pictures Neptune, reclining and looking to the left out to sea. On the horizon, two ships, belonging to Sir William Phipps, prepare to raise treasure from Silver Shoals. Circling the top of the coin is Latin for, “All things from the water”. This medal is not dated, but the ships on the horizon are recovering the treasure from Silver Shoals, which was accomplished in 1687, thereby the date is known.