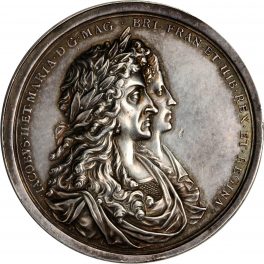 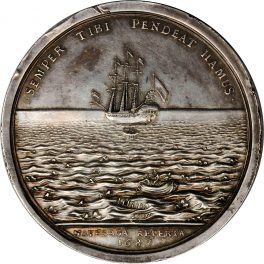 Obverse of this medal features the draped busts of King James II and his wife, Queen Mary of Modena. The King wears a laurel crown. Encircling their heads is written, “James II and Mary, by the grace of God, King and Queen of Great Britain, France and Ireland”. Under the truncation is written “G.B.” for George Bower the engraver from the Royal Mint. Reverse, this medal features a ship near the horizon and a small boat in the forefront. Coming up from the waves are the visible ribs of a Spanish treasure ship that sank in shallow water in an area known as Silver Shoals. “Let thy hook always hang”, a Latin reference from the Roman poet Ovid, encircles the top of the medal. Below the exergue line documents the success of the venture, “shipwrecked [wealth] recovered, 1687.” The wealth of the shipwreck encompassed over $90,000.