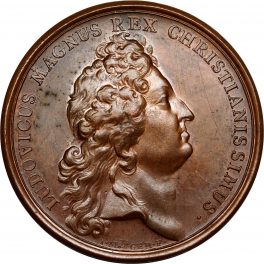 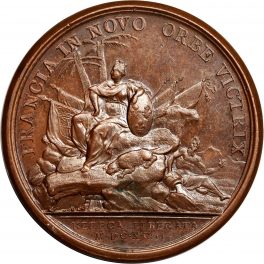 In 1690, the French bested the English at the Battle of Quebec and gained the city itself. This medal commemorated the French victory. Obverse, a mature Louis XIV face to the right, his hair flowing down his back and some to the front of the bust. “Louis XIV, the Most Christian King” circles his head. The artist, J. Mauger F. signed at the bottom of the medal. Reverse, the crowned Quebec City goddess sits on a rock, along with a beaver, a royal French shield, and a captured British banner, indicated the French victory. In the water at her right is the St. Laurence, the river god, watching in amazement. Encircling the medal is the boastful, “French victorious in the New World; Quebec liberated, 1690.”