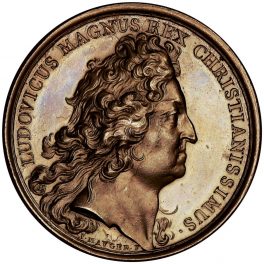 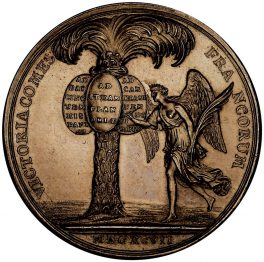 This medal commemorates the French victory over the Spanish at the port city of Columbia in 1697. Obverse features Louis, XIV; around his image written is his Latin title, which translates to, “Louis, the Most Christian King”. The artist signature under the image of the bust reads, “J. Mavger. F.” Reverse depicts Victory, the woman, writing the French victories in Spain, Flanders, and Carthagena on three oval shaped shields, which hang from a palm tree. The Latin on the shields translates to “At Carthagena, in the New World; at Atham in Flanders; at Barcelona in Spain.” Around the scene is Latin which translates to, “Victory, the companion of the French, 1697”. After the capture, the French gained more than $100 million in silver and gold from the Spanish treasure fleets, making this medal a truly celebratory one.