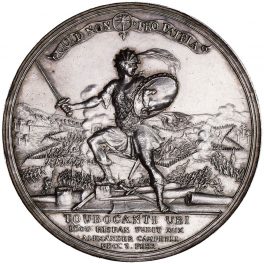 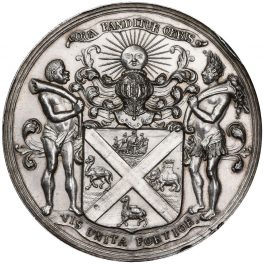 History, Information, and Value of 1700 Scottish Colony at Darien Medal

This important medal commemorates the Scottish attempt to defend Darien, Panama against the Spanish. Alexander Campbell, who led the poorly, prepared Scottish eventually lost the colony to the Spanish. The few Scots who returned to Scotland were given a grant of Arms and a golden medal. Obverse stands a Highlander in armor, holding a sword and a shield on which is drawn a unicorn. In the background, the battle wages with the Spanish rapidly overrunning the Scottish fort. The ribbon over the Highlander translates to “What not for the Fatherland? At Toubucan, where Captain Alexander Campbell put to flight 1600 Spaniards, February 8, 1700.” Reverse is the Arms of the African and Indian Company of Scotland, which consists of the St. Andrews Cross, two Africans holding the shield, and the Latin motto, “Wherever the world extends, united strength is more powerful.”